Beware the Love Bomber: 11 Lessons I Learned the Hard Way

in All Trending Articles, Living, The Heart of the Matter
A A
0

In my last article, I described finding a new love and how wonderful it felt. A new relationship is exciting, and brings hope, promise and new experiences. After experiencing many bad relationships, I believed this new one had potential. At first everything seemed perfect. We discovered we had much in common, our circumstances were similar and we both felt a sense of comfort and ease; a natural ebb and flow. There was an understanding about our schedules, making time for each other and establishing an open line of communication. This felt good! This felt right!

Intent on not controlling the situation, I focused on my feelings. I thought creating a new experience with this new love would provide both of us with a fresh start. After a short period of time, he declared his love for me; recognizing “it was too soon, but he just couldn’t help it”. He revealed intimate details about his past, saying it was important to be completely transparent.  He explained that love was withheld from him growing up and in his marriage. His revelations and vulnerability touched my heart.

Too much, too soon, too fast?

Despite the situation initially feeling “right”, the declaration of love coming so soon made me a little uncomfortable. Was I uncomfortable because of the circumstances, or because feelings were surfacing? I wanted to believe he was “the one”. He said all the right things. In past relationships I found loving statements often were not validated by actions, which I tended to overlook.This time, I decided to allow things to unfold at their own pace while I quietly observed, determined not to ignore warning signals as I had in the past.

I invited my new guy to accompany me on a previously planned trip to Mexico, thinking it was a great opportunity to learn more about his personality and intentions. I noticed some cautionary pink flags leading up to the trip; his words promised action, but there was no follow-up. For example, he said he would cover some of the upcoming costs for the vacation knowing I paid for the room already – but he did not. This was one warning signal that reminded me to pay attention to other things that might be off. 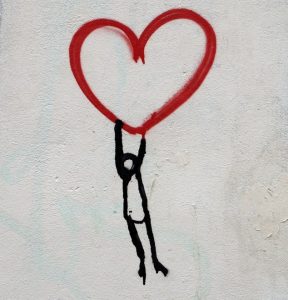 Being together for 10 days was revealing. By remaining an objective observer, to the extent I was able given the situation, I began to clearly see the relationship for what it was. Something nagged at me during the trip; it wasn’t quite right. I became increasingly aware his words were empty with no substance. He spoke about love often and with conviction, but his behavior was inconsistent.

His proclamation of love played on my feelings and desire to be in a relationship. He made endearing comments at all the right times, and I believed him – because I wanted to believe him. Fortunately, as the pink flags turned red, I realized we were not meant to be. Actions definitely speak louder than words.

Upon returning home and ending the relationship, I spoke with a friend who had a similar experience. I would soon discover the meaning of Love Bombing.

The Definition of Love Bombing

From Wikipedia:
Love bombing is an attempt to influence a person by demonstrations of attention and affection. It can be used in different ways and can be used for either a positive or negative purpose. Psychologists have identified love bombing as a possible part of a cycle of abuse and have warned against it. One of the signs of love bombing in the start of a relationship is much attention in short time, and pressure for very rapid commitment. It is often the first sign of narcissism, and if successful turns to control and degradation.

Excessive attention and affection do not constitute love bombing if there is no intent or pattern of further abuse. The key to understanding how love bombing differs from romantic courtship is to look at what happens next, after two people are officially a couple. If extravagant displays of affection continue indefinitely, if actions match words, and there is no devaluation phase, then it’s probably not love bombing.

11 lessons I learned from the Love Bomber

It wasn’t until I had ample time to process what happened that I realized this relationship was similar to the dating experience that led to my marriage. A lot of us repeat unhealthy patterns – that’s the bad news. The good news is that once we recognize them, we can choose to stop making the same mistakes.

This situation provided me with valuable insights, which I consider a gift. I can be vulnerable with someone and that does not make me weak or needy. I do not owe anyone an explanation, nor do I feel guilty when I do not provide one. While compromise is necessary in a relationship, I do not have to give up something that is particularly meaningful to me. Honoring my intuition is necessary and important.

When something doesn’t feel right, it probably isn’t.

Amy Jones is a midlife coach, author and international speaker. Everyone has a story to tell and a book inside them. Once we let go of the stories that aren’t true, we feel relieved, empowered, accomplished, unburdened and validated. That’s how Jones’ felt once she told her true story of surviving cancer and overcoming emotional trauma and abuse.

She’s had the highs, the lows, the scars, the bruises, the highlights and the low lights that she can now reflect on this ever-evolving journey of life we are on. Amy’s passion has always been helping people and being of service. Through her personal trials and triumphs, as well as the experiences of her clients, Amy’s goal is to help people build a life just like she’s done; a life they love waking up to every morning feeling anything is possible.

Pick up one of Jones’ books: Better for Being Broken or Break Through – or visit TheAmyJones.com when you are ready to revive your life and write your story.

I Miss Trick-Or-Treating the Way It Used to Be. Do You?