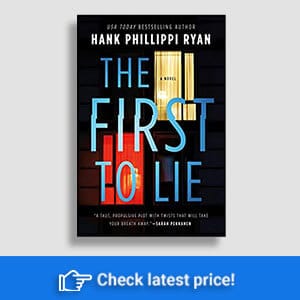 Never one to sit still, Ryan gives us yet another wonderful book full of intrigue and suspense. She masterfully weaves her story and keeps readers guessing until the end.Don’t miss this one!

About the book (description from Amazon):

We all have our reasons for being who we are―but what if being someone else could get you what you want?

After a devastating betrayal, a young woman sets off on an obsessive path to justice, no matter what dark family secrets are revealed. What she doesn’t know―she isn’t the only one plotting her revenge.

An affluent daughter of privilege. A glamorous manipulative wannabe. A determined reporter, in too deep. A grieving widow who must choose her new reality. Who will be the first to lie? And when the stakes are life and death, do a few lies really matter?

Hank Phillippi Ryan, now in her 43rd year as an investigative reporter (and her 33rd with WHDH-TV in Boston) with 36 EMMY’s and numerous other journalistic awards, wrote her first novel at age 55. Though she had no experience as an author, she knew deep in her gut she had a good idea. She remembers the day she made the decision to write.

“I came home and said to my husband ‘I’m going to write a book.’ And I was obsessed! I wrote every waking moment, would not be deterred, and did not give up. I was determined that I would write a novel, and that it would be published.  And that became PRIME TIME, which became the Agatha winner for Best First Novel, and that was the beginning of my career as an author. Simply because one day I had a good idea–and acted on it. It’s very hard to explain how driven I was–and how certain.”

That was fifteen years ago. Today, Ryan, age 70, is a national bestseller of 11 thrillers.  She has five Agathas and a Mary Higgins Clark Award, as well as a host of other credits to her name.  Critics call her a “master at crafting suspenseful mysteries” and “a superb and gifted storyteller.”

I met Ryan recently through a mutual friend, Andrea Peskind-Katz, of Great Thoughts, Great Readers.  Greatly impressed with her extraordinary success achieved as a writer later in life, I asked to share the story of her second act with the 50Plus-Today community.

Born Harriet Ann Sablosky, Ryan acknowledges she was not always the self-assured, outgoing person she appears to be now. She describes herself as a nerdy kid who spent much of her time alone devouring Nancy Drew and Agatha Christie novels. She began to come out of her shell in college, where a friend told her she didn’t look like a Harriet and instead called her Hank. The name stuck, and to this day suits her very well. Ryan says she continues to evolve year after year, learning from life experiences along the way. Today, she strives to be grateful, have fun and be present on a daily basis. Perhaps most importantly, she knows now some of the little things don’t really matter. As self-improvement is a forever project, Ryan knows she still has work to do.

“I am still a perfectionist, don’t get me wrong. I’m a workaholic, incredibly determined and devoted, and have not quite learned yet to relax.   That may be my next project.” says Ryan.

Ryan loves being 70.  At this point in her life she is well aware she does not have control over how things work out in the end, even with careful planning. She believes worrying is a “waste of time that takes up precious brain space” and no longer stresses about the “what-if’s” as she did when younger. We do the best we can to achieve our desired results, she says, but the final outcome may ultimately turn out differently than anticipated. Different doesn’t necessarily mean worse, however. The possibility certainly exists that the unexpected ending could actually be better.

“Don’t lose the potential for joy by burying it in worry.” Ryan advises.

She lives all aspects of her life, both personal and professional, in a way that allows her to remain open and ready to embrace whatever happens. As an example, Ryan describes meeting her husband, criminal defense and civil rights attorney, Jonathan Shapiro, completely by chance on a vacation in her late forties. Neither was actively looking for a partner, but this random encounter completely changed the trajectory of both their lives. Now married 24 years, they don’t celebrate the anniversary of the day they met; instead, they celebrate the anniversary of the day before they met. And they call it the “You Never Know Day”.  Because, she says, you never know what wonderful thing is around the next corner. 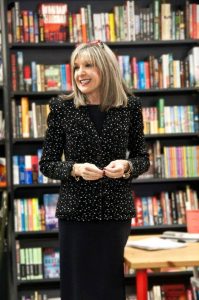 The process a writer employs to complete a book is extremely personal; Ryan says what works for one may not work for someone else. She lets her story evolve as she writes. Ryan does not start with an outline, or even a firm idea of what will happen in the end. Instead she approaches it in much the same way she allows her investigative news stories to develop, beginning with extensive research that eventually leads her to the ultimate conclusion. Readers often tell Ryan they are surprised by how a novel turns out, a comment she loves to hear since every book ending is a surprise to her too.

“I have been a television reporter for 43 years, can you believe it? I have wired myself with hidden cameras, gone undercover and in disguise, chased down criminals and confronted corrupt politicians– so every day as an investigative reporter, I experienced how our world works, how people make decisions, and how people go after what they want – – for better or for worse. I have 36 Emmys for investigative reporting, and every one of those Emmys represents a secret that someone didn’t want you to know, right? And that is exactly the same as in my books – – I realize that a good story is about secrets, and so that is the focus and central theme of all of mine,” she explains.

Ryan’s background in investigative journalism translates well into her legal thrillers. It doesn’t hurt that her husband is a Harvard educated lawyer who can provide law related details to ensure accuracy in her books. He benefits from the relationship too; their careers are complementary. Ryan’s superb story-telling skills sometimes prove helpful to him when developing closing arguments for the courtroom.

Recommendations for would be writers

One day you may have an idea for a book, which can possibly change your life if you act on it. What’s the worst that can happen if you don’t succeed? Life goes on. You pick yourself up, learn from your mistakes and try again.

“There are no secrets to success except it takes time and patience. It’s hard work, takes a lot of determination and skill, and at some point you will feel like giving up. Don’t give up. Email me, and I will encourage you!” says Ryan.

To avoid getting discouraged, Ryan finds it helpful to divide the overwhelming task of writing an entire book into doable sections. Her daily goal is to write a minimum of 540 words per day,  and she does not stop until she accomplishes this task. In this way she sets herself up for success every day which provides the fuel and power she needs to continue. Determine what works best for you, and put a plan in place, she says. You won’t know if you have a book in you unless you try.

Ryan, truly a poster child for following her dreams in mid-life, has no plans to slow down anytime soon. She loves her life and continues to welcome new opportunities. Equipped with the confidence that accompanies age, Ryan knows her capabilities and enjoys unique challenges.

In her words, “Success and growth are never-ending. Happily.”

16 Ways to Cook With Turmeric, the Trendy and Super Healthy Spice

Second Act Of The Month Award for February 2023: Carolyn Clarke

Second Act Of The Month Award for November 2022: Lori Williams