in Product Reviews, TV Reviews
A A
0

Who is Steve Madden?

Most of us know the popular shoe brand, but who is the designer? Is he even a real person? Who knows? Who cares?

Maddman: The Steve Madden Story answers this question. He has an interesting story, and you may remember bits of it from The Wolf of Wall Street that highlighted his relationship with Jordon Belfort – which is what ultimately inspired him to tell his story, and his side of things.

The documentary first aired in 2017, but I didn’t know about it. Or maybe I did, but didn’t make time or even have the curiosity to watch it back then. Now, in 2020, in the midst of the Covid19 quarantine that lasted far longer than anyone imagined, I look obsessively for interesting shows I did not yet see. I binged early on in the pandemic on Netflix shows and find lately can’t find anything very exciting that’s new to me. My 26 year old son, who came home for a little while furloughed and frustrated, asked the other day if we knew that Steve Madden was in prison for two and a half years for stock fraud. My husband’s response was “Who’s Steve Madden?” I explained he is a famous shoe designer and his brand is everywhere. But no, I didn’t know anything about him personally.

That night, after three games of backgammon, when my husband and I decided to look for a movie on Netflix, Maddman: The Steve Madden Story showed up in the listings. Our interest was slightly peaked, only because of the conversation we just had with our son. And so we watched. our expectations low. However, we were pleasantly surprised to find it was a compelling and well-done documentary about a recovering addict and former convict who designs the trendy, popular and affordable shoes. After three decades in the business, you can now find the Steve Madden brand name on shoe boxes in 65 countries around the globe.

More about Steve Madden, the person

As a kid, Steve Madden was a problem child, always in trouble and told by his father he wouldn’t amount to anything. Steve, now a father of three himself, realizes he has severe ADD, a learning issue no one knew much about during his childhood, which led him to abuse drugs and alcohol to cope with his frustration. Once he became sober and thus better able to focus, Steve compulsively channeled his creativity into successful shoe designs.

What was his relationship with Jordan Belfort? Danny Porush (Jonah Hill in the Wolf of Wall Street movie), a childhood friend of Steve’s, approached him with a radical business idea. Porush and Belfort put the Steve Madden brand, which at the time had only one store, up for public offering. This strategy later became known as “pumping and dumping.” Madden took the bait. They made $22 million in three hours. No one imagined Steve Madden’s IPO would bring the FBI’s attention to Belfort’s company. Madden also didn’t know that Belfort and Porush secretly owned 85 percent of his company. Despite his time in federal prison for stock manipulation, money and securities fraud, plus a hefty $9 million settlement, Steve remained true to his goal to sell his shoe designs. And that’s what he did. His incarceration did not end his story or define it.

Clip from The Wolf of Wall Street

Steve, released from prison in 2005, managed to increase his company’s sales by almost $100 million, and more than double its net income, by 2006. Also during that year, he married a woman who worked for him and hired his prison buddy Verne Kneeley to help the business. While in jail, Steve taught business classes to the inmates providing education to help them achieve success after their release. He continues to work with this population today.

No longer the company’s CEO,  Steve remains the chief designer. His ability to know what customers want, as well as his speed to market help propel his success.

A Story of American Ambition and Success

Other New York storefronts closed over the years, but Steve Madden is going strong with 250 stores worldwide and 13 brands under the Steve Madden, Ltd. umbrella. Steve Madden’s story is not pretty. It shows, however, that with a drive to move forward at all costs, those of us with difficult lives can achieve success. It may be an unconventional path, but it can be done. Great message!

We loved getting to know Steve Madden and hope you do too. Highly recommend. 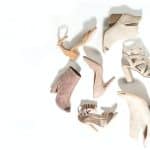