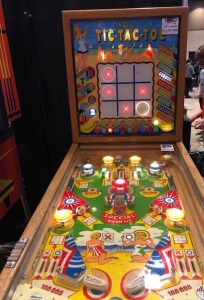 The annual Texas Pinball Festival in Frisco in March is a big deal. I was excited go this year to see the latest machine from Stern Pinball Inc,The Munsters, unveiled in January, 2019 in Las Vegas. I have great memories of the many hours I spent playing pinball games in the 1970’s at the local Getty gas station with neighborhood friends. My recollections of The Munster reruns I watched obsessively during those years are just as happy. I loved that wacky series. Though the series lasted only 2 years, from 1964 to 1966, the show remained on air in some form since in syndication.

Not surprisingly, the Pinball Festival was very crowded with throngs of people fighting for a turn to play their favorite games. Pinball is a national pastime and the event seemed to include every machine ever made, from the old wooden models to the newer  electronic ones with complex visuals and sound effects. If pinball isn’t your thing, you may not know enthusiasts still spend hours basking in the frenetic beauty of the blinking lights and irrepressible randomness of the ball’s movements.

The Munsters – An Iconic and Timeless Family

The Munsters are a strange but honest blue-collar American family. The series highlights the misadventures of these friendly, but not really scary, monsters. Herman, the father played by Fred Gwynne, is Frankenstein’s monster. His wife, Lily, played by Yvonne De Carlo, and Grandpa, Lily’s father, played by Al Lewis, are vampires. Eddie, Herman’s and Lily’s son played by Butch Patrick, is a werewolf. Marilyn, played by Beverly Owen (Season 1) and Pat Priest (season 2), is their niece and the only “normal” looking one in the cast, but is looked upon as the ugly duck of the family. The characters are weirdly lovable and still have a big following today.

Eddie and Marilyn Munster (aka Butch Patrick and Pat Priest)

I met Butch Patrick, age 65, and Pat Priest, age 83, who were at the festival greeting fans. Both were easily recognizable despite the passing of years. Sadly, these two are the only cast members still living. They were located, along with the Munster Koach, the car used in the series and now owned by Butch Patrick, nearby The Munsters pinball machine display.

The design of The Munsters pinball machine transports players back to 1313 Mockingbird lane, joining the entire Munsters family. It boasts beautiful artwork inspired by the supernatural family, sounds from the TV show and great LCD visuals. It was fun to play and provided a cool haunted pinball experience.

What a wonderful, fun walk down memory lane! If you have a chance to play The Munsters Pinball machine, let us know what you think!

Why Regular Exercise Is Essential for Aging Well