No Result
View All Result
Home Living Love & Sex at 50+

Online Dating: How Do You Know It’s Right When It Was Always Wrong Before?

Online dating profiles often belie the value of their subjects.

It’s not just the “they don’t look like their pictures” problem.  Or the blatant lies or half-truths.  It’s that people either won’t or simply cannot describe themselves in a meaningful, highly-representative way in their description.

I recently came across a woman on Match.com I’ll call A1 to counter the notion that there is only one, but also that she is an “A1” grade catch. She used two limited reveal photos and ordinary, superficial descriptions to represent herself on her profile. It seems ironic that a woman of considerable substance would post a bland preview, but like many onliners, she was wary of the exposure and confident the photos would do most of the talking.

If at first you don’t succeed…

She ignored my first slightly obnoxious text mocking her answer to a prompt for a movie she was “embarrassed to love” (Spaceballs).  Unrequited first texts are deal-breakers from the outset for many;  if I didn’t find her photos alluring, I probably would have licked my chops and moved on.

Before giving up, I decided to check out a trailer on the Spaceballs movie.  There were some funny people and scenes.  And, so, I proceeded with a second text, praising, rather than poking fun at Spaceballs, The Movie.

It turned out to be one of the most significant texts I’d ever written.  She responded, basically acknowledging that MAYBE I wasn’t as big an A-hole as she originally thought.

The first rapid fire round of texting brought me to the question of “meeting up” and her to answer, “Definitely maybe”, or something like that.  Following a restless night’s sleep and support from her therapist, A1 agreed to meet me the next day. My usual next step after “making the sale” is generally to finalize a time and place, add “just another obligatory meet-up” on the calendar, then put it out of my mind. As chemistry is rare, it’s just a more efficient way to go.

At one point, I texted her, “Do you think any of this can wait?”  And she emoji-ed laughed.

A1 can text, and she can talk, too. We continued to text, and though I had no intention of hearing her voice until we met, I felt compelled to pick up the phone to find out more. It was almost as if the phone pressed, “voice call” on it’s own and attached itself to my ear. We talked for hours each of the two days before meeting. It made absolutely no sense, of course, but then love rarely does. 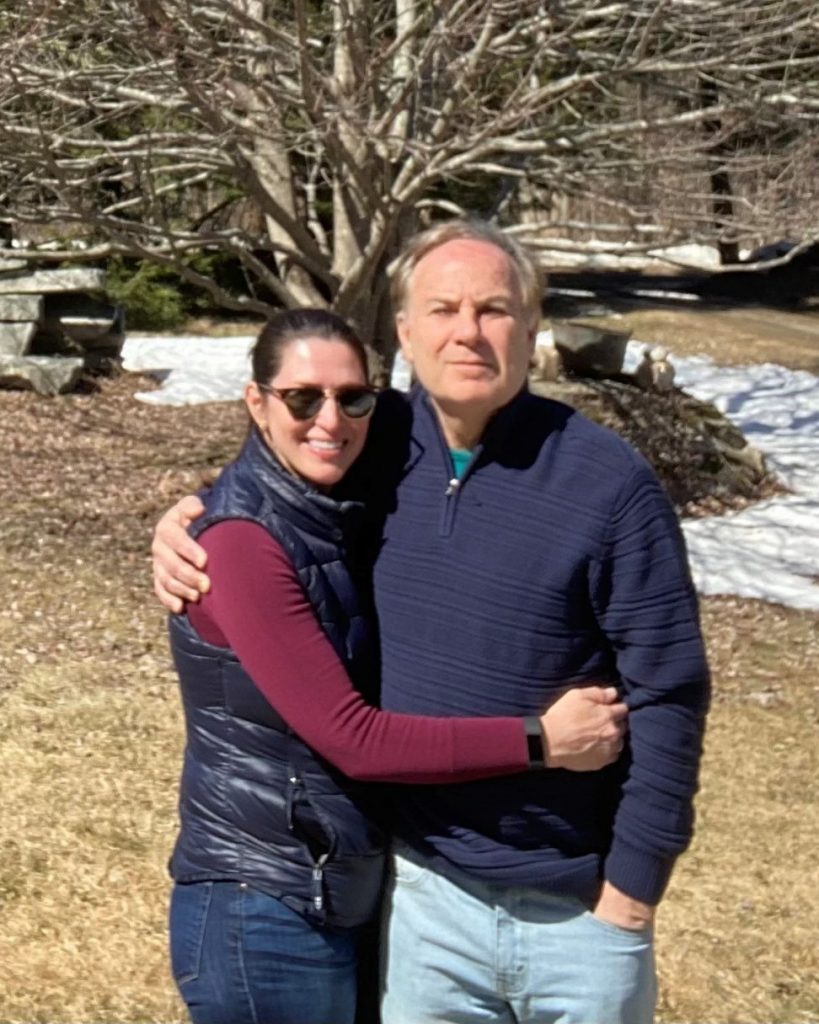 Michael Lubell and A1

We started dating during Covid

With all the talking, we certainly had sufficient time to nail down the plan of where, when, and what we were doing. However, this was not the case.

A1 was Covid Conservative; you might say she kept Covid Kosher. I considered myself Covid Respectful. I knew the date involved walking around the Fairfield beach, and that she might need to wear her mask the whole time.  But I thought we were grabbing coffee and meeting inside the restaurant first.  So, I arrived early, asked the waitress for a menu and awaited her entrance.

She showed up on time, saw me “mask down” at the table and motioned me to come outside.   I shrugged, made a coffee drinking motion and beckoned her to join me. She gave me the negative head-turn, insisted I come out, explaining briefly after “hello” that she doesn’t eat indoors.  Despite four hours of pre-game on the phone, we got the plan wrong.

Never mind. We didn’t have breakfast inside that day, December 31, 2020.  We walked for an hour and a half.  A1 grabbed my arm as we strolled along Fairfield beach. We covered a lot of topics, as easily and candidly as we did over the phone.  There was the right amount of laughter, serious discussion, and lighter fare – but no pause longer than a second or two.  I met my Match, indeed.

A1 wore a mask the entire time.  As we broke out of a great good-bye hug, I snatched a quick peak down the cleavage of her mask for a look at her eyes and mouth.  My standard takeaway from first dates pre-Covid was that “No kiss meant no chemistry”.  When with a Covid Conservative, that glance was practically the equivalent.

We hugged and whispered about how much fun we had and how great it felt- even in the midst of a Covid masquerade. By the end of that first walk, I knew my online dating days with anyone else were behind me.

Now we take long walks or hikes a few times every week, which I like to call  “The Covid mature suburban dating special”. We also text several times a day, share take-out or home cook, and spend at  least two hours on the phone every night.  In that roughly 200 hours of often-intense, often-hilarious conversation, we learned about each other in a way I never knew any other woman.  It is effortless, boundlessly comfortable and warm.  I feel completely safe and open, like I knew her for all of my life. My screen name on Match was “SeriouslyFunny1”  There is no way I could find a match without compatibility on either of the components that made up the screen name I chose.

A1 really gets me, despite our thirteen year age difference. We both laughed when she confessed she thought my snail’s pace walk our first two dates was due to age infirmity when in fact I slowed down on purpose to instigate a more romantic pace.

I’m not sure whether to thank Match.com for the introduction, or ask for a refund since in total it took me over three hundred dates, three thousand dollars over twelve years to find true love.  A1 spent the introductory fee to meet her Match in exactly one date.  On a cost per date basis, I suppose, it came out fairly close to the same.

Neither of us is complaining.  We came to the same place from opposite directions.  A1 experienced an ugly and painful divorce, while I am 12 years past mine.  Nonetheless, we arrived at the same place much more aware of what we wanted and needed in a relationship. We both believe it’s better to be alone than with the wrong person which many people talk about, but don’t take action. As a result, they aren’t able to live their truly happily ever after”.

Online dating is challenging anytime, but more difficult in a pandemic

Dating online is challenging in itself; it seemed unfathomable I would find someone to love in COVID. “Six feet apart” felt like “six-feet under”, until A1 rocked my world.  Zooming revolutionized the business environment, but fell woefully short as a substitute for live dating. My three Zoom dates bombed, primarily because for me, chemistry requires the third dimension live video telecom failed to provide.

After all the heartache and disappointment, I am now the “smartest guy in the world.”  Many questions about online dating were answered through this experience, including the idea of “opposites attract” vs. “find one’s clone in a partner” . A1 and I have our differences, but all the important attributes and elements line up, and add to the depth and the trust.  There is no pressure to change in any meaningful way.

We share the same world and political views, and our values coincide nicely. The music and movies we enjoy are similar. We both possess a high degree of empathy and little concern with materialism.  And, even as we joke about our best feature being geographic desirability, there is no question that proximity helps.

Aim high and be patient

We met fixated on what we did not want, and focused on finding the calm and joy that the combination of trust and respect can bring. Like a perfect golf shot, this whole chemistry thing felt seamless when it was  right. I cannot understand why it took me almost a lifetime to hit one straight and long shot down the middle. There will be wayward shots, I’m sure, but the foundation feels solid.

My advice to frustrated daters is to never give up, but never to settle.  If it takes a few hundred dates or just one to make the catch, online dating is worth the time and the price in the end.

At least it was for me and A1, who feels more and more like THE ONE every day.

Following an NYU MBA, Northwestern BA, a modest business career with practically record-setting job changes, Michael left the world of sales and marketing for the freelance creative side to write in 2018.  No longer beholden to the whims and politics of the corporate world, he found solace and satisfaction writing for Next Avenue on subjects as diverse as Latecomer Comedians, Zoom Reunions, and Bi-polarized Friendships.

When not driving part time for Uber/Lyft and writing a book about it, he is on the golf course or in the gym.  Michael lives in the Norwalk/Westport area, and is the proud father of two boys, ages 18 and 21.

8 Reasons Modern Bidets Are Becoming a Must-Have Bathroom Accessory: Do You Need One?

Time to Love or Leave? Tips for Successful Relationships After 50

My Friend Just Got Divorced After Decades Together – How Can I Help?