Traveling Solo (But Not Alone) as a Single Female

in All Trending Articles, Travel
A A
7

Traveling Solo, But Not Alone

Last week, I had the opportunity to join a Road Scholar trip to San Antonio and Fredricksburg for three days. The full tour was actually six days long, continuing on to Johnson City (home of LBJ) and Austin after my departure. The experience was wonderful from start to finish and not one I will forget anytime soon.

For those not familiar with Road Scholar, this not-for-profit travel organization plans educational learning adventures around the globe for travelers age 50plus. They also organize grandparent and grandchildren trips, often referred to as “Skip-Gen” travel. The trips offer varying degrees of activity, which is clearly stated in the descriptions. For example, some involve a small amount of walking, while others are more strenuous, such as the hiking or bicycling tours. They even offer online tours for those who prefer to explore from the comfort of their own home. Truly, there is something for everyone and the planned tours go just about any location you might want to go. As a woman traveling solo for the first time, I admit I was a little nervous. Would the other travelers be friendly or stick just with people they knew? When we had free time, would I find myself alone and lonely? Would I have anything in common with the other travelers? What will we talk about? Just in case, I packed a book to help pass the time when alone in my room.

Well, I didn’t have a chance to open my book even once. It turned out our group of 30 was a warm and welcoming collection of like-minded people. Quite a few were single older females traveling alone. On the first evening, the group leader, Janie Cadena, held an orientation which included introductions of all the travelers. She asked each person to share their name, where they were from, and how many Road Scholar trips in which they participated previously.

I learned that participants flew in from all parts of the U.S. Some were on their first Road Scholar Adventure and others on their 20th. After this fun and interesting icebreaker, it was easy to visit with each other and everyone seemed eager to do so. What these travelers all had in common was a thirst for knowledge and desire to explore the world, along with great energy. That first night set the tone for the remainder of the trip.

The tour started at the Drury Plaza Hotel  & Suites San Antonio Riverwalk, a perfect choice of location as we could simply walk out the back door directly onto the Riverwalk. The hotel was beautiful, comfortable and very clean. In addition, they offered complimentary hot breakfasts daily, and dinnertime snacks and three drinks on the house each night. After the orientation the first night we had a dinner together followed by a spectacular outdoor light show about San Antonio history created by French artist Xavier De Richemont and projected onto San Fernando Cathedral, the oldest cathedral in the United States.

Bright and early the next morning we gathered in one of the hotel conference rooms for a presentation from noted history professor, Dr. Carolina Castillo Crimm. She lead us on an enthralling fast-paced, two hour journey through Texas history. We learned about the Spanish Conquistadors, the Indian tribes who settled here, the original cowboys and more.

I knew some of the stories, but there was one little known fact shared by the professor I found particularly interesting. Did you know that the original cowboys were black? All I knew about cowboys previously was what I saw in the movies, as played by white actors. Thank you, Hollywood. In reality, most of the cowboys were slaves freed after the civil war. Though not trained for many jobs, they could become cowboys. All they needed was a gun and a horse.

We then embarked on a walking fieldtrip with a local expert to see the sites described in the morning presentation. The walk, of course, included a visit to the Alamo and also a mid-day lunch at a historic hotel. We had dinner at a local restaurant that evening, followed by a narrated barge ride on the San Antonio River. The weather was perfect, and the barge ride offered an interesting and relaxing way to finish off the day in a beautiful setting.

The guides impressed upon us throughout the day that San Antonians are fiercely proud of the cultural richness of their city, the seventh largest in the U.S. They go to great lengths to preserve their historical sites.

Here’s a fun fact. Alamo Plaza is currently under construction with plans in place to build a new museum dedicated to donated artifacts from Phil Collins over the years. As the story goes, Collins love affair with the Alamo began when he first learned its inspiring story at age five from the Disney movie Davy Crockett, King of the Wild Frontier. In 2012 he even published a book called, The Alamo and Beyond: A Collector’s Journey. 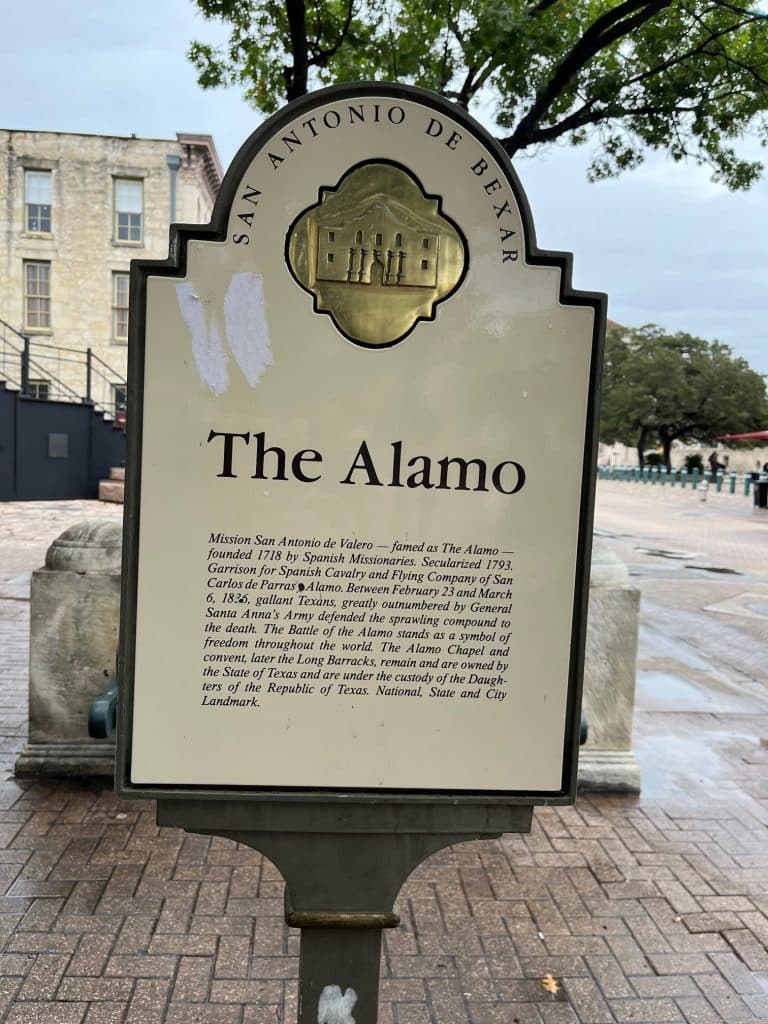 We started out early on a field trip to explore the San Antonio Mission National Historic District, a UNESCO designated World Heritage Site. While exploring the missions that make up this complex, we learned about the early settlement efforts of the Spanish to convert locals to the Roman Catholic Church and an agricultural form of life. Lunch was at an authentic Tex-Mex restaurant in El Mercado, which is the largest Mexican marketplace in the U.S. After our meal and a little shopping, we drove through the historically rich west side of San Antonio enjoying the many colorful murals along the way.

Then it was time to head to Fredericksburg. We arrived in time for dinner on Main Street after checking into our accommodations at the Fredericksburg Inn. This hotel was a hidden gem, though it didn’t look like much from the outside. The rooms were fantastic, the beds incredibly comfortable, and the outdoor area included a gorgeous pool and fireplace. They served a complimentary hot breakfast each morning, and coffee, tea and soft drinks were available all day long. Most importantly, the location was walking distance to the downtown area, an incredibly charming area featuring an eclectic mix of art galleries, restaurants and boutiques.

After breakfast, most of the group went to the National Museum of the Pacific War, the only museum in the U.S. dedicated exclusively to the battles of the Pacific theater during World War II.  I opted to instead use this time to explore the downtown area further before heading home. I love to shop, especially in quaint historic towns, and Fredericksburg offers a wonderful selection of unique clothing, shoes and knick-knacks.

By noon I was on the road to go home. I was sad to leave, but thoroughly enjoyed the drive through the beautiful hill country on my way home.

“What’s the difference between a traveler and a hitchhiker? Ten minutes!”

This trip was extremely well-planned with a nice combination of activities. We moved quickly from one activity to the next as the itinerary was jam-packed. Our program guide, Janie, was an experienced group leader who kept us organized with patience and a sense of humor. My favorite line from her was “What’s the difference between a traveler and a hitchhiker? Ten minutes!”.

Janie and the other local experts kept us moving and on schedule, not an easy task with a busload of people. As a result, I left feeling like I saw and did everything I wanted. It was a busy few days, but not overwhelming. Each activity smoothly transitioned into the next, and I appreciated that some free time was built into the schedule.

Would I go on another Road Scholar trip? You bet. Traveling with this organization was fantastic. I felt comfortable and safe with this group and found traveling alone was not at all an issue. I greatly enjoyed the focus on history, but also that the guides encouraged us to learn about and experience the local culture. Clearly a lot of thought and effort went into planning this trip, resulting in a stress-free and rewarding travel experience. My only suggestion for improvement might be to choose restaurants with a wider selection of healthy food choices. I tend to be a little picky about what I eat, so I do not know if I my fellow travelers felt the same or not.

Traveling solo with a group can seem daunting when you don’t know anything about the other participants. Not everyone travels the same way. The individuals in this group were all curious explorers who chose a Road Scholar trip specifically because of their emphasis on education. We bonded due to this shared interest and quickly became a cohesive community.

My sense from speaking to those in the group who participated in other Road Scholar adventures was that their previous experiences were similar, despite the different locations and types of trips. If you enjoy learning adventures, I highly recommend you check out Road Scholar for your next trip. Road Scholar: Texas - On the Road

Arthritis? How Did I Get That and How Can I Fix it?

Arthritis? How Did I Get That and How Can I Fix it?