Book Review: All the Little Hopes by Leah Weiss

All the Little Hopes

All the Little Hopes by Leah Weiss is a captivating historical fiction novel which highlights life during World War II in North Carolina.  It has my favorite type of narrators, and not one but two.  A child narrator typically lends an innocence and complete lack of guile to a complex situation.  In All the Little Hopes, Weiss gives us both with the dual perspectives of Lucy and Bert.

Lucy Brown is one of many children who lives on a tobacco plantation turned beeswax harvesting for the war.  Beeswax is a big business to provide the waterproofing needed for the war effort.  At thirteen, Lucy possesses skills to be a true asset to her family. However, her intrinsic nature and love of mystery keep her occupied elsewhere.  She meets a friend who experienced a vastly different childhood named Allie and nicknamed “Bert”.  Exiled by her father after her mother and unborn baby die tragically, Bert went into yet another tenuous situation that deteriorates quickly.  The two girls soon find a deeper purpose and begin their own Nancy Drew type escapades.

While the premise seems a bit juvenile, this book proves anything but.  These secrets surrounding the missing men and obstacles are engrossing, and offer little known details about how German Prisoner of War camps were handled stateside.  I certainly did not know most of which Weiss shared.  The reverberations of WWII felt far from the European front invade this Southern North Carolina town.

In addition, the uncertain fate with two of Lucy’s relatives fighting in the war become real to you.  Weiss portrays the fear, patriotism, and also the deep devastation that occurs during war.  Those left behind on the home front possess a bravery that is unsung as their loved ones are away from them.  The bond forged and deep friendship in a family of choice between Lucy and Bert will linger with you.

Weiss expertly provides detailed and thoughtful characterization with the minor characters are woven throughout.  She also shares a bit of the mystical whimsy typical in Southern fiction.  This book is chock full of all of the aspects we love to see from a coming of age novel, with a friendship strengthened by a greater cause to seek truths buried.

I was provided a free reader copy from Sourcebooks Landmark in exchange for my honest review.  The opinions shared in this review are my own.

Born in North Carolina and southern by grace, author Leah Weiss grew up raised in the foothills of the Blue Ridge Mountains of Virginia. She graduated from Dunbarton College in Washington DC with a degree in music and received an education degree from Kent State University. She retired in 2015 from a 24-year career in education, and published her debut novel, If the Creek Don’t Rise: A Novel two years later.

If the Creek Don’t Rise sold over 100,000 copies. Selected as a Library Reads and an Indie Next, the novel was #5 on the national Indie Picks for winter 2017-2018. It was also nominated for the Southern Book Prize and was a 2018 finalist for both the Library of Virginia’s Literary Fiction and People’s Choice Awards. Her second novel, ALL THE LITTLE HOPES, released in July 2021, holds traces of her mama’s Carolina life.

Leah writes full time and enjoys meeting with book clubs and speaking about the rewards of becoming a bestselling author late in life. When she’s not writing, she loves to travel and hike with her husband Dave, a gentle man, a beekeeper and avid reader. Learn more about Leah Weiss here. 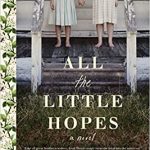 Worried About Your Upcoming Cruise? Don’t Be – Here’s Why

Book Review: Next Level, Your Guide to Kicking Ass, Feeling Great and Crushing Goals Through Menopause and Beyond

Worried About Your Upcoming Cruise? Don't Be - Here's Why