An adventure for all readers

” by Liza Nash Taylor provides adventure for all readers, especially women. And even more now than ever, with many of us stuck semi-quarantined in routines that allow lots of time to read.  This book provides a tad over 300 pages that detail the life lived by a young woman trying to grow up and into her future, who has some very difficult times while she’s at it…

May Marshall’s story begins at her home, in a very small southern town.  It’s placed in the era of Prohibition, and May’s father is a local bootlegger. He will be prosecuted for his crime-of-the-time, and his daughter likely charged as well.  There is no mother as she ran away long before this tale started, leaving her husband, her seven-year-old daughter, and their devoted housekeeper, Delphina. While those characters populated the book, they are not nearly as important as those May meets after she leaves her birthplace and history behind.

One of the truths of this tale is that most of us, if we’re honest about it, cannot simply run away from everything.

We take all of ourselves along with us wherever we go.  May Marshall, our “heroine” – although it stretches a point to call her that; “main character” would be a more honest description – is running from herself, a fact that doesn’t take anywhere near 300 pages to make the reader well aware.  But May sees what she wants to see, and she visualizes a golden future as someone accomplished at dressmaking – a skill she learned from her mother at the youngest of ages. Expelled from her first year of college (read all about it!  I won’t spoil the experience for you here!!), May then “recuperates” by running off to New York City, and finds work at a sewing machine in a costume shop.  She has the skills and the imagination needed to create unique designs and make them come to life in fabric. Her early success emboldens her when the troupe she dresses is invited to perform in Paris.  The REAL Paris, France!

This book would not need 300 pages if May’s success were to continue along this path.

That would be an easy cop-out for an author not nearly as skilled and worldly as the creator of this one, whose fluency with French tells us all we need to know about her ability to make this story come to life. But of course, just to make sure she does just that, Nash Taylor takes no such waffling way out.  Instead, she fashions her main character as a full-fledged “patsy,” a naïve, virtually made-to-order target for folks who look to take advantage. May does have one stalwart friend who’s hers to the very end, but just about all the others fall by the wayside somewhere along the very long path this very unusual “heroine” travels – psychologically as well as physically – through all 300 compelling pages.

This book catches you like a fish hook. The more you read, the faster you’ll wiggle –not so much to get off, but rather, to turn the pages ever faster and faster, in order to reach the inevitable end where May makes what seems an inevitable choice between two alternatives.  But – is the choice really hers at all?

I hope all the above at least tempted you to read this cleverly titled book, but in which only the word “runaway” has its real meaning.  The rest – like so much of May’s experiences as titular “heroine” –  has very little to do with etiquette of any kind. There are some great allusions to Southern hospitality though that may either ring true or make you laugh, depending on your own background.  But to find out about this, and the outcome of May’s story, you do have to read the whole book.  All 300 pages, because you won’t be able to guess correctly until you do – and at the end, you may still be surprised at how surprised you are! 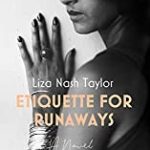 Have You Been a Victim of a “Friend’s” Narcissistic Abuse?

Have You Been a Victim of a "Friend's" Narcissistic Abuse?